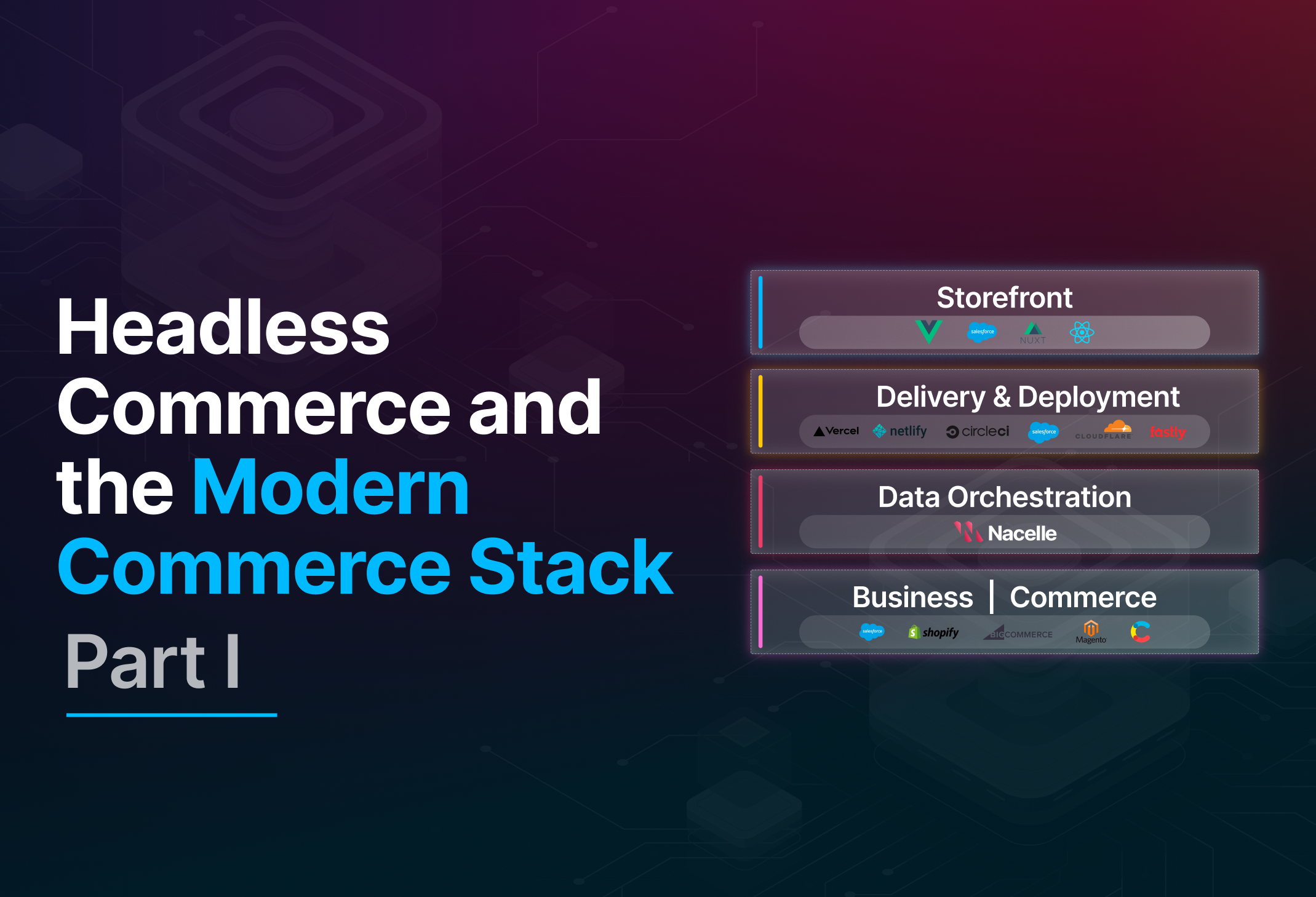 When headless commerce first started to gain traction in 2017 it created quite a stir.

First, the name was confusing. How can you do commerce without a head (storefront)? Second, it seemed like the entire commerce technology landscape would be disrupted if modular best-of-breed solutions challenged the large commerce suites. Third, after years of gaining acceptance for Software as a Service (SaaS) as a legitimate way to buy and deploy software, headless seemed like a scary, massive shift back to placing the onus on IT to manage lots of infrastructure and technology.

Two out of three initial concerns were spot on. The name headless continues to confuse people, and the trend is as disruptive as originally thought. It turns out one cannot do eCommerce without a “head” despite the name. In fact, most headless commerce innovation is focused on the head—PWAs. Further, headless has turned the market on its head (pun intended). Established industry players like Salesforce, Shopify Plus, and Adobe are all investing in modular API-first offerings to complement their full-stack suites. Eight startups in the headless space have raised over $700 million dollars in the past couple of years. This type of activity doesn’t take place without clear market demand.

Yet, despite headless initially putting a focus back on IT, a balance has emerged. During the initial wave of headless, integrating many of the core pieces of the software stack were left to internal IT teams. Further, the bespoke nature of headless forced early innovators to build software that was necessary, but not necessarily strategically valuable. Yet, most companies had gone away from the model of massive IT teams for infrastructure or custom-built software. Would the promise of headless be enough for companies to re-form IT teams? Would that continue to be the requirement? Would that be the reason why companies would not go headless?

The modern commerce stack is a set of tools and technologies for building headless commerce. These systems and/or toolsets include: 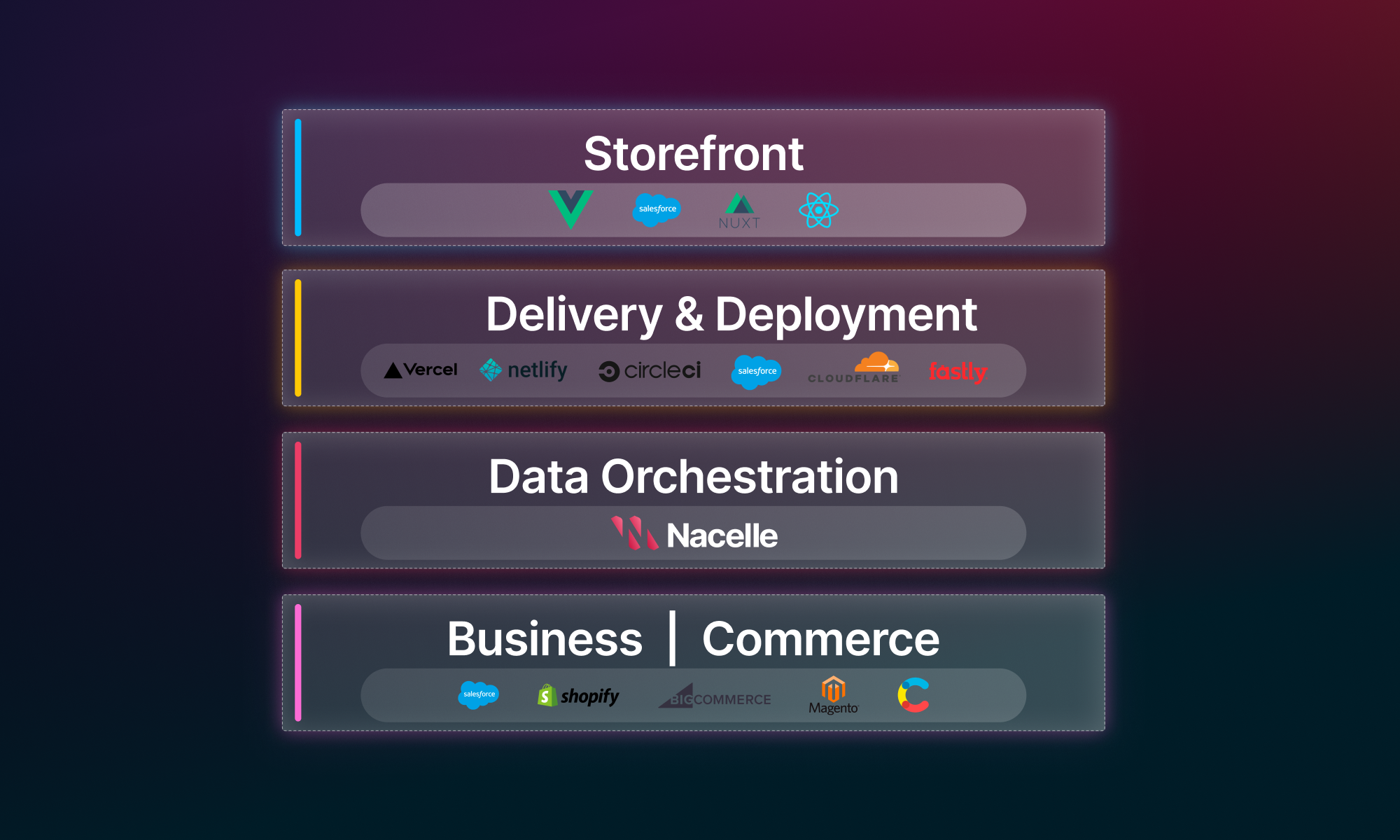 Each layer of the modern commerce stack is purpose-built for its function. While vendors may have offerings that span multiple layers, they also offer products that can be adopted as individual components composed into solutions via APIs. The tools of the modern commerce stack are distinguished by enabling customers to adopt individual layers of the stack and not requiring them to adopt multiple layers that may not be purpose-built for the solution.

The solutions of the modern commerce stack allow for companies to maintain a lean tech footprint. Developers and business users get access to tools that are hosted, managed, or right-sized for the task at hand. Unless required, developers and IT are not asked to support infrastructure or services of non-strategic importance.

How Is a Modern Commerce Stack Different From Traditional eCommerce?

The modern commerce stack is API-first and modular. The first wave of digital commerce platforms encompassed the entire suite of functionality for building and running an eCommerce store. All the tools for creating the storefront, merchandising and promotions, managing pages and layouts, and orders and fulfillment, were built and packaged together, often referred to as “the monolith.”

The modern commerce stack enables the merchant or developer to pick the best tool for the job or function—often called best-of-breed—and compose solutions using APIs. Most merchants start by building a decoupled “head”, often a single page, progressive web application. The new head uses eCommerce and other system APIs to create shopping experiences that achieve growth and innovation goals. The APIs can come from one or many purpose-built systems making it modular in nature.

The API-first, modular systems need not be new or even replacements for existing systems. As long as the underlying platform supports the modular approach and is delivered in a cloud-native and hosted environment, it is part of the modern commerce stack.

What Are the Benefits of the Modern Commerce Stack?

First and foremost, the modern commerce stack is the technology you use to capture the benefits of “headless commerce." Most often the benefits accrue from building a SPA/PWA, which is the foundation of headless investments today. Want to learn more about why to go headless? Click here.

Another benefit of the modern commerce stack is that merchants who chose this path need not grow their tech footprint. Developers build features necessary for innovation. IT isn’t asked to build systems that require ongoing maintenance and development.

From the initial implementation to ongoing development and management, teams move faster. The tools in the stack shorten implementation projects with no integrations or bespoke app building. The time savings means developers ship features and experiences more frequently.

As there is no one size fits all solution for eCommerce, stakeholders are free to choose the best-fit tools for their respective function or product area giving them productivity and performance.

The technology needs of businesses are constantly evolving. Over time as these requirements change, thanks to modularity, the stack can evolve and the stack can adapt as needed.

Also, as solutions based on best practices for modern software development, the modern commerce stack is durable. Firms that are building components within the stack are well-funded, solving problems that typically wouldn’t make sense for one company, and are executing on long-term roadmaps.

How Is It Different From Headless Commerce?

Prior to the formation of the modern commerce stack, companies going headless had to take on incremental projects and headcount for infrastructure that needed to be built, deployed, and managed. While conceptually very appealing, Forrester research estimates that nearly 85% of the market have either intermediate or beginner digital maturity—signaling that most aren’t ready to embrace this new tech burden.

Am I Ready for the Modern Commerce Stack?

Not everyone is ready for the modern commerce stack. As with any technology adoption, people and processes are as important as technology. Here are a few questions you should ask yourself: Have you built strong alignment across technology and business leaders to prioritize ongoing investments in innovation? Are you ready to get the benefits that a modular, API-first PWA can provide? Do you have developers or partners ready to build Vue or React applications?

If you answer yes to those questions, then you have the basics to be ready for the modern commerce stack.

Ron joins Nacelle with 20+ years of experience as an entrepreneur and numerous roles in product management and marketing, most recently as Ecosystem Product Management lead at Salesforce Commerce Cloud.